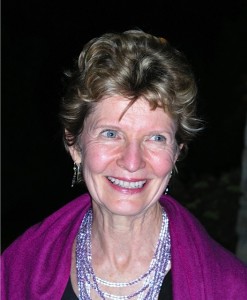 Dr. Dorothy Jane Pratt, PhD., 70, founding member of Friends of the Blue Ridge Mountains, died Monday, August 12, 2013 in her home in Purcellville, VA, surrounded by her husband of 43 years, John “Jed” Shilling, and her two daughters, Kaile and Kaitlin.

She was born the second of two daughters to the late. Alice E. Palmer, M.D. and. Lawrence Pratt, M.D. in Detroit, Michigan.

Dr. Pratt, known as Jane, spent more than 35 years in the field of global and domestic sustainable, equitable development and environmental stewardship.

Dr. Pratt moved to Washington DC in 1973 where she began her career at MITRE, one of the few companies at the time hiring women for professional, rather than secretarial roles. At MITRE, she was involved in developing the process for Environmental Impact Assessments, newly required under the National Environmental Policy Act. In 1979, Dr. Pratt was hired by the World Bank, where she served in various executive positions at the World Bank, including Chief of Strategic Planning and Personal Assistant to the Senior Vice President, Operations Chief, Country Operations for Rwanda, Burundi, and Zaire; Chief, Environmental Operations and Strategy Division, Senior Advisor to the Vice President for Environment and Sustainable Development; and Leader of the World Bank Office of UN Conference on Environment and Development (UNCED, Rio de Janeiro, June1992); She contributed to Bank projects promoting sustainable public health, water, energy, agriculture, and transportation development in South, and Southeast Asia, and Africa.

In 1994 Dr. Pratt left the World Bank to become President and CEO of The Mountain Institute, which she led for eight years. The Mountain Institute (TMI) is an international NGO devoted to conservation of mountain ecosystems and sustainable development for mountain people that respects their unique cultures, with focus on the highest, longest, and oldest mountain ranges around the world (Himalayas, Andes, Appalachians). Under Dr. Pratt’s leadership, TMI founded The Mountain Forum, a global network of individuals and organizations concerned with the well being of mountain people, their environments and cultures; the forum shares information, research, and experiential learning on electronic platforms as well as professional meetings. She was on the organizing committee for the United Nations International Year of Mountains Bishkek, Kirghizstan conference in 2002, and was recognized as a distinguished contributor to the Mountain Ecosystems World Meeting, Mountains Towards 2020 in Juarez, Peru in 2002. While leading the Mountain Institute, Jane also actively served on the board of United Religions Initiative, a group based in San Francisco that promotes cooperation among different religious groups around the world, and on the board of the Millennium Institute, an NGO promoting an integrated approach to development planning that took account of the relations of economic, social, and environmental factors over time. She was a contributing author of the World Bank’s 2002 World Development Report on Sustainable Development.

After leaving The Mountain Institute, Dr. Pratt founded EcoLogica, LLC, a consulting firm whose mission is to promote economic and ecologic sustainability. Clients include the World Bank, World Wildlife Fund, Conservation International, UNDP, UNEP, Aga Khan Foundation, Centennial Group, Japan International Cooperation Agency (JICA), Transparency International (TI), the Water Integrity Network (WIN), Millennium Water Alliance. She was one of the lead authors of the chapter on Mountain Systems in the Millennium Ecosystem Assessment, launched by the UN Secretary-General, Kofi Annan in 2001 and published in 2005. Dr. Pratt was later the President of the US chapter of United in Diversity, an Indonesian based non-profit established with Indonesian leaders from business, government, and civil society who are working together to improve their nation’s democratic government and economic and social well-being. Their flagship program is the IDEAS Leadership program, with MIT, about which Dr. Pratt had recently finished writing a book.

She was a Founding Board Member of Friends of the Blue Ridge Mountains, a group striving to protect the Blue Ridge Mountains and Appalachian trail in western Virginia. She served as president of the Virginia Cooperative Master Gardener Volunteer Association serving Loudoun County, and she had recently passed her black belt pre-test in aikido. She was a member of the Goose Creek Friends Meeting.

Dr. Pratt graduated from Grosse Pointe High in 1960. She received her B.Sc. from the University of Michigan, a Certificate in Southeast Asian Studies from Yale University, and her Ph.D. in Political Science from the Massachusetts Institute of Technology. She is survived by her husband John “Jed” Shilling, daughter Kaile Shilling and son-in-law Vince Beiser of Los Angeles, daughter Kaitlin Shilling and sweetheart Lars Oleson of Jakarta, grandchildren Adara and Isaiah Beiser Shilling, sister Lawrene “Lawrie” Porter of Scottsdale, and numerous cousins, nieces, nephews, and friends.

In lieu of flowers, donations may be made in her honor to The Mountain Institute, Friends of the Blue Ridge Mountains, or the Goose Creek Meeting.