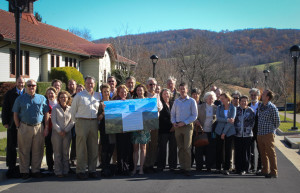 At the Launch, several members of the Steering Committee made presentations describing a structure for the Alliance and highlighting the benefits for members: Mike Kane of the Piedmont Environmental Council discussed threats to the Blue Ridge as a way of illustrating the kinds of issues (e.g., proposed amendments to the steep slopes ordinance and plans for gas transmission lines that will cross the Blue Ridge in several locations and could disrupt the Appalachian Trail) the Coalition can address. Hilary Falk of the National Wildlife Federation offered thoughts on a governance structure to support the face-to-face component of the Coalition, and Bill Howard from the Downstream Project demonstrated an on-line platform that members of the Alliance can use to stay connected, learn about issues of mutual interest, and access resources.  Carole Napolitano, President of Friends facilitated the discussion, and oversaw the signing by attendees of the Blue Ridge Declaration of Stewardship Principles found below.

By way of response, participants at the Launch event provided input and identified topics for further consideration. The Alliance continues to meet regularly.  More details can be found at blueridgeconservation.org